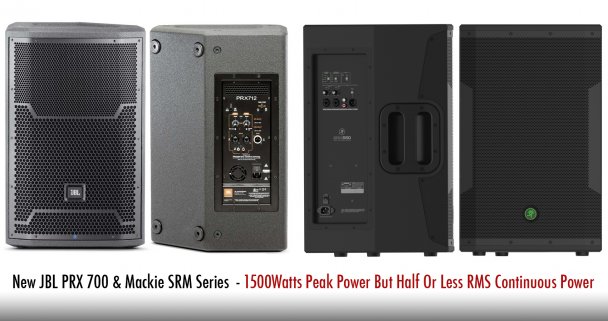 Why are the power ratings of some of the latest active loudspeakers so high? Are the components better? Or is something else going on?

Looking at the specs for the new JBL PRX 712 and Mackie SRM550 we see that both use 2 amplifiers of half the published power rating, one each for the woofer and high frequency drivers. So the JBL PRX 712 is rated at 2x 750W and the Mackie SRM550 rated at 2x 800W. This type of amplifier design could be seen as a cost saving measure using the economies of scale to source one amplifier instead of two amplifiers at different power ratings. Other loudspeaker manufacturers such as QSC with their K and KW series also use this method.

Taking a closer look at the specifications we see that the JBL PRX 712 doesn’t state whether the power rating is RMS or peak power. My guess is peak power with an RMS rating of 50%, just like the Mackie SRM550 that states 800W RMS (400W RMS for each amplifier).

Based of these facts and my assumption, the JBL PRX 712 woofer driver is powered by 375W RMS and Mackie SRM550 woofer is powered 400W RMS. The same respective amplifier also powers the high frequency driver but this would only require 100W RMS. The JBL PRX uses the JBL 2408H-2 high frequency driver, an updated version of the JBL 2408H-1 driver used in the PRX 512 powered by 100W RMS.

The difference between RMS and peak output is sometimes misunderstood. The way that these active loudspeakers are being marketed doesn’t help and can also be deceptive.